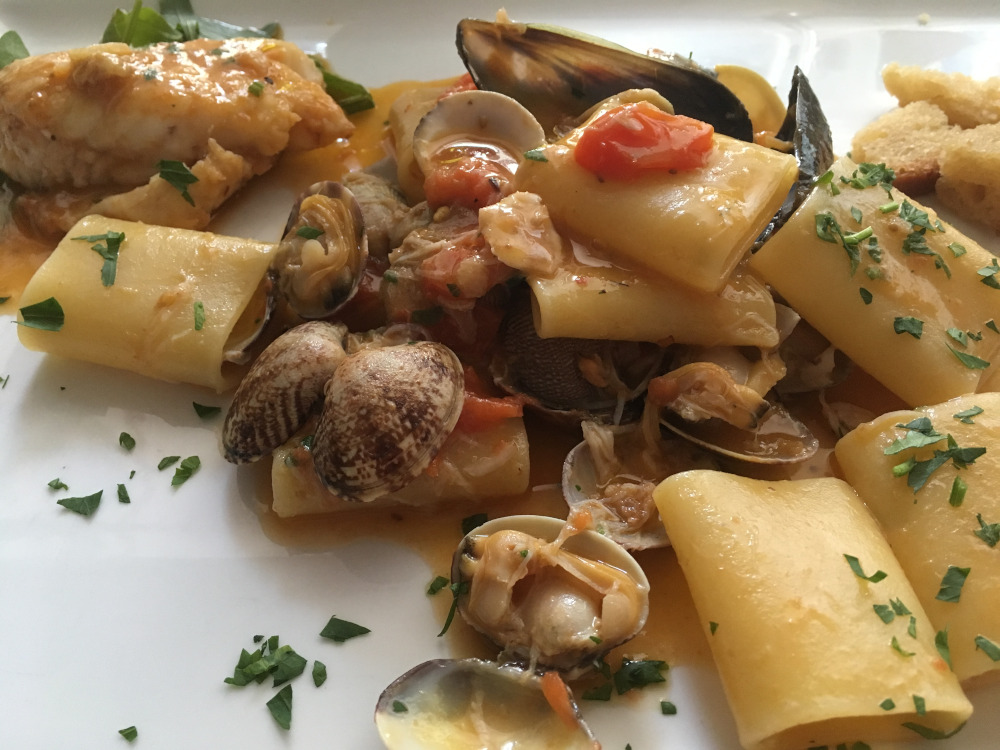 Wherever you travel in the Western world, the chances are you’ll never be too far from a restaurant offering Italian food. But is it really Italian? Here, The Local speaks to Monica, the L’Approdo Restaurant owner, who dispels a few persistent food myths.

Pepperoni Pizza Want some spicy salami slices on your pizza? Then don’t ask for ‘pepperoni’ in Italy – it’s the plural for peppers, so you’ll end up with a pizza covered in grilled peppers. “If you want to order a ‘pepperoni’ pizza in Italian, then you have to ask for ‘salame piccante’ (spicy salami)” or “Pizza Diavola” counsels Monica.

Penne Alfredo This is a definite no-no in Italy, according to Monica. Legend has it that, back in the 1920s, an Italian brought a similar dish over to America that was cooked with butter and sage. However, possibly short of ingredients one day, he substituted cream for the butter and parsley for the sage. Presumably his patrons liked it because the dish is now common in English-speaking countries. Not in Italy, though. As for the chicken element of the Anglo Penne Alfredo – “Just don’t go there” sighs Monica. “In Italy, the only chicken you put in pasta is livers and kidneys when you make a ragù sauce. But that’s about as far as we go.”

Spaghetti Carbonara with cream “Carbonara is definitely never cooked with cream in Italy” says Monica. “And it should only be cooked with guanciale (pork cheek).” If you can’t get hold of this, then some pancetta will do. Other genuine Italian tips: the cheese should be either Pecorino Romano or Reggiano Parmesan. Crack the egg (he suggests using about one egg yolk per person but some Italians also use a whole egg) over the top of the pasta.

Garlic bread The idea that this could ever be considered Italian is particularly perplexing to Monica. “It’s strange because a baguette is not even Italian in the first place,” she says. Italians, of course, rub their garlic bread to make bruschetta. “It’s easy to spread the garlic on Tuscan bread, but try it on any other sort and it just breaks apart” says Monica. “Maybe that’s why English people use garlic butter.”

Ham and pineapple pizza “I’m going to get killed for this but I actually quite like this one”, says Monica. “As far as I know, it was invented in Canada somewhere – but you’ll definitely never find this in Italy. Italians are not very adventurous when it comes to pizza.”

Spaghetti with meatballs “Oh God!” sighs Monica. “Well, this is definitely not Italian.” The dish was probably created by Italian immigrants who moved to the US in the early 20th century. Unable to find good-quality tomatoes, they added meat – which was cheap and readily available – to the sauce in order to make it sweeter and thicker. Traditionally, however, meatballs, or ‘polpette’ as they are known in Italy, are served either as a starter or a main course with potatoes, vegetables or beans. “But definitely not with pasta!”

Italian dressing You may have come across this orange-coloured concoction of corn syrup, vinegar, vegetable oil and bell peppers on British or American supermarket shelves. But there’s nothing “Italian” about it, says Monica. “In Italy, there’s really only one way of making dressing: by mixing olive oil and balsamic vinegar – or occasionally red or white wine vinegar.” You can either drizzle this directly on to the salad or mix it beforehand. “Italian food is simple. I don’t know why the Americans and the British love to complicate things,” grumbles Monica.

Spaghetti Bolognese In Anglo countries, spaghetti Bolognese is a classic. For Italians, it’s a heinous crime against food. Monica suspects that the dish came into being during the Second World War, when American and British soldiers passed through Bologna and tried ‘tagliatelle al ragù’. Probably because they didn’t know its name, they dubbed the sauce “Bolognese” and later substituted the spaghetti for the tagliatelle. “But the sauce just doesn’t stick properly to spaghetti,” Monica points out. “In Italy, you’d only serve ragù with pasta like tagliatelle, fettuccine or maccheroni.” Don’t even get her started on the sauce… “We generally use pork with a little beef, some garlic, a little tomato sauce, onions, celery, carrots and wine – but definitely no herbs or chilli,” she says. Oh, and you have to slow-cook it for three hours.

Macaroni and cheese “I’m pretty sure the Americans invented this a long time ago,” says Monica. In Italy, however, there are strict rules about which sauces you serve with specific pastas – depending on their texture and shape. Macaroni (‘Maccheroni’ in Italian), for instance, is typically served with ragù or a tomato sauce. The closest Italian dish to macaroni and cheese that Monica can think of is “pasta pasticciata”, where you mix left-over pasta with béchamel and bake it in the oven. “But it’s not the same, and we’d never go out of our way to cook that.”

Panini In the UK, a “panini” is a grilled sandwich. Ask for “panini” in Italy, however, and you’ll get several ordinary sandwiches (“panini” is simply the plural of sandwich). “Instead, you’d need to ask to have it toasted (“tostato”),” advises Monica. Sandwiches in Italy also tend to be simpler. “They don’t contain butter, for a start. Normally, a sandwich is just a roll filled with cheese, cold cuts and – more recently – a helping of grilled vegetables.” If you fancy a more British-style sandwich, she suggests ordering a “tramezzino” – a triangular sandwich made with soft white bread with the crusts removed.

Food Delivery on Board in Capri